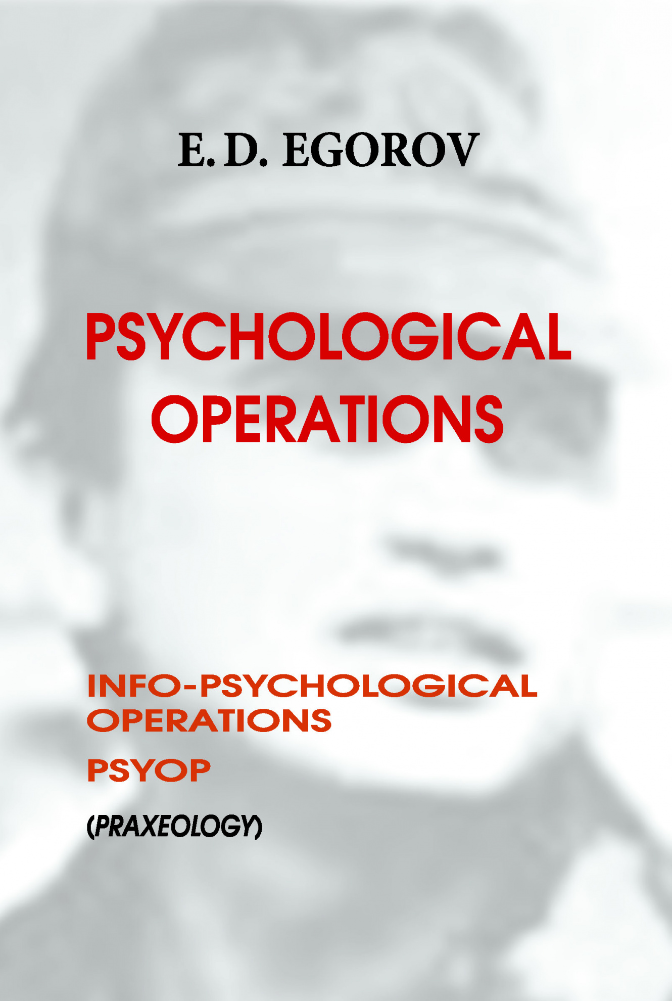 Dear reader, the book offered to you is in no way a textbook on preparing and conducting information-psychological (PSYOP) and information-propaganda operations, all the more so — this is not a guide to their implementation. This book is a guide to understanding the nature of the impact that you undergo during such operations. An aid that will help you to protect yourself and be yourself! You see a scientific study of the  echanism of influence on the subjects of public relations with the aim of achieving their desired behavior. The presentation of the material in the form of «job description» is nothing but the desire to facilitate its understanding and a method of attracting readers’ attention.

Is the impact on human behavior humane? This question is asked by people who naively regard their status as absolute “independence” from society, as a real state of reality. I will not even try to dissuade them. In the process of reading the book, most of these baseless questions will disappear.

Is it correct to use the term “behavior management” for a personality? Yes, it is, no doubt. Personality is such
only when it is interrelated with other subjects of society. Thus, we have the right to extend “behavior management” to the subjects of social relationship, which in their form are associations of personalities, up to and including government entities. The maximum of what we can specify in this case is that it is about managing the social behavior of the subjects of the relationship.

In the scientific literature, the problems of the current state of confrontation between states are widely discussed. A significant number of new terms appears, which, according to the author, are not always disclosed as scientific categories. The search for scientific truth is in progress. The following terms are widely used:

Representatives of military science are actively discussing the likelihood and nature of future information wars, talking about «contactless wars», talking about the «sixth,seventh generation of wars.»1 It is comforting that all these theories are united by the recognition of the fact of an actual increase of info-psychological and info-propaganda operations in the confrontation.

The author is inclined to believe that modern realities confirm the predictions by R. Schafranski that new information technologies will make it possible to fight directly at the level of consciousness.2 In any case, theorists of the Air University (United States Air Force) are actively exploring and testing possible options for such a confrontation. This is of particular importance in light of the fact that the United States has long accepted the substantive part of the theory of “controlled chaos” by Steven Mann3 as a guide to action. This does not add safety and predictability to interstate communication. The world has come close to transferring the entire severity of the confrontations to the struggle at the level of consciousness.

So it happened in our world — the most promising and efficient discoveries are primarily used in the military, military-political areas. With this in mind, it is easy to make a conclusion about the humanitarian importance of research, which allows us to give knowledge to the reader and help one to defend oneself from undesirable informational and psychological impact. The theoretical basis for conducting information and psychological operations is the fundamental development of praxeology.

To think that PSYOP is the lot of the military and politicians is a profound mistake! The most part of the impact on the population is carried out in ordinary civilian life, the vast majority of them — in business. Shaping of demand and its control has long been a separate subject of study in educational institutions of economic orientation and is widely used in practice. Moreover, the process of behavior management is characterized by the detalization of the mechanisms of influence on an object and their isolation in separate subjects of research (marketing, advertisement, etc.).

This book is written on the basis of both parts of the book Praxeology. Foundations of the Theory. Let us begin to consider this interesting area of human activity. Due to my “military” past, most of the examples will be from the field of military and political confrontation.